Chester’s Revenge is the kind of title that immediately asks questions of the audience. Who is Chester? Who does he want revenge against? Why didn’t the developers name the titular character something more marketable, like ‘LeChuck?’

Side note: Do Not make a drinking game out of every time Chester says ’revenge’ or ‘vengeance’ in the opening. Trust me.

I played the closed demo version of Chester’s Revenge, which contains the first level and is, according to the text in the bottom, an early alpha build. 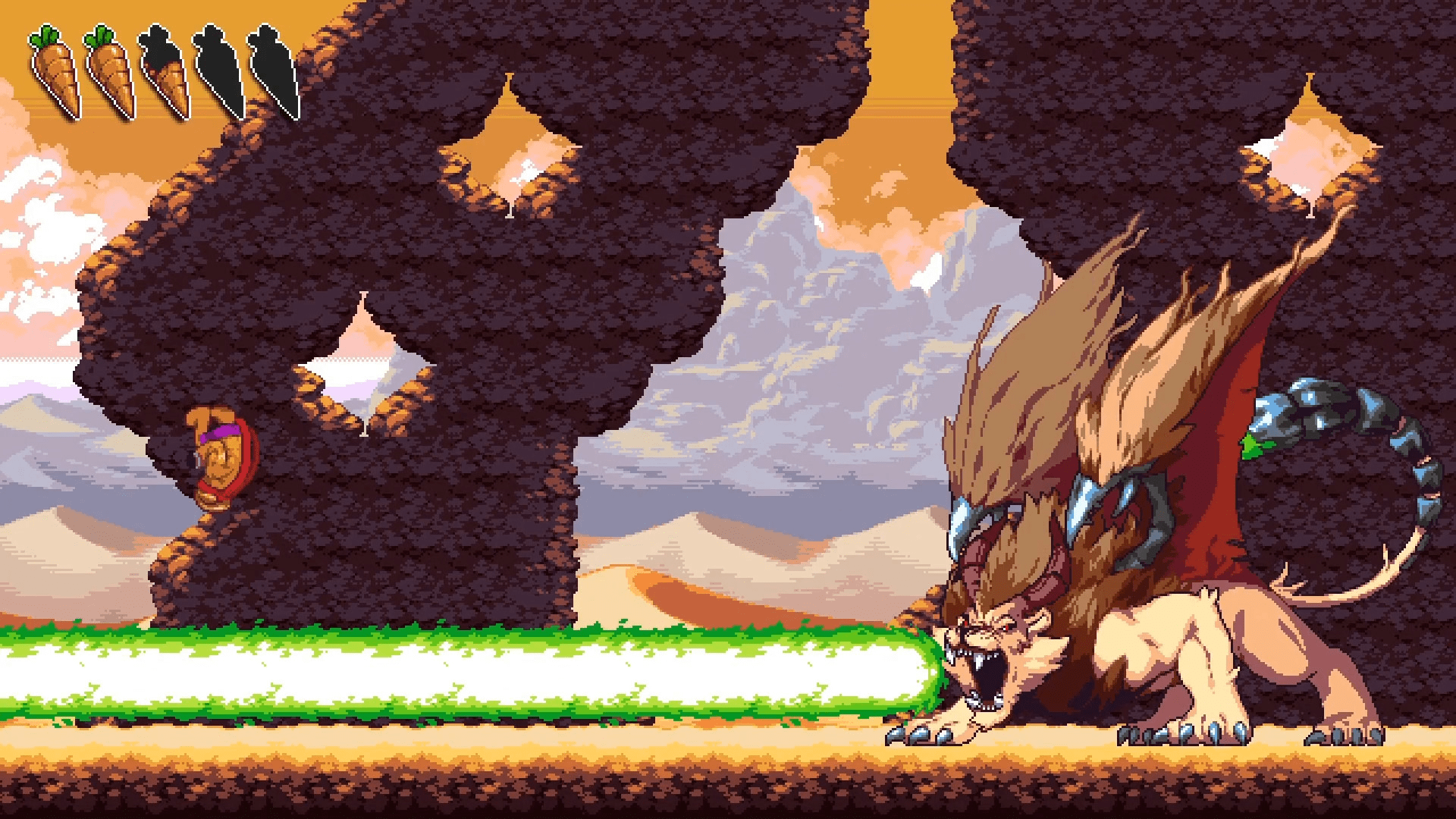 The Count of Monte Cristo

Chester’s Revenge is an affectionate parody of basically the entire 80’s, and it plays like a classic run and gun platformer. It controls really well, much better than I had expected from a game that isn’t even in a public early access stage. Platforms are easy to land on or jump from and the coyote time—the ability to jump off of a platform for a few moments after stepping off the side and one of those subtle things that makes platformers feel good to play—is already nailed down.

While the platforming elements are about what I would expect from a full release, the run and gun combat leaves something to be desired. The first level has two enemy types in it. Two. The first level of the first Mario had better enemy variety than that! Furthermore, one of those enemies is basically a goomba, slowly walking back and forth with no means of hurting you beyond contact damage.

The gun combat is also very basic as of this build. You hold down the fire button for the whole level and all the mooks die before they become a threat. Only the more advanced enemies from later in the level will survive long enough to bother you. It’s probably a bad sign that you could remove almost all the enemies in the level and as long as I help the fire button down, I wouldn’t even notice. There’s no strategy beyond ‘shoot thing until it dies, dodge if necessary.’ Even the first boss is guilty of this. I completed the first phase by standing perfectly still and jumping occasionally.

The dodge mechanic is, appropriately, a little dodgy. The dodge animation feels slightly longer than how long you are actually invincible, so you can frequently dodge and end up taking damage at the very end of the dodge anyway. I don’t know why specifically the invincibility feels too short, whether it’s an animation issue or what, but it’s very annoying. Especially considering the problem this game has with the health system.

Chester’s Revenge, as part of it’s 80’s inspired experience, has a lives system. If you run out of lives, you have to start the entire level over from the very beginning again. I know having lives in a modern video game is a contentious practice already, but Chester’s Revenge really dropped the ball on this one. There is no way to gain more lives, or for that matter, to heal any damage you take. In other words, the level is an endurance challenge that you have to complete in a single run with functionally one long health bar and no healing. Any damage you take before the boss fight is health you won’t have for the boss fight. And God help you if you lost a life before then, because you aren’t getting that back either. The real kicker is that you only get two lives.

You know what else is extremely fun? Finding a checkpoint while you have zero lives so it doesn’t matter in any way because dying forces you to start the level over from the beginning. Seeing a checkpoint in a level has never been so demoralizing before.

Oh, if any of you were worried, the instant-death spikes from Cave Story have found other work since that game’s release. And they are, in fact, more annoying in a game like Chester’s Revenge which, again, has a lives system. You can lose a life on full health because your hand slipped or you misjudged a jump. And again, I don’t think I can say this enough, you cannot get your lives back nor can you heal, so if you ran afoul of an instant-death spike, you may as well jump back in the death pit and restart the entire level from scratch.

Oh yeah, and the first boss has an attack where he summons those instant-death spikes and I don’t think I will ever forgive the developers for including that. I cannot name off the top of my head a single time that an instant-death attack has been fun—the closest I can think of is technically possible to survive if you’ve been playing well up until then—but I can certainly think of many times a boss having an instant-death attack has significantly reduced my enjoyment of said boss. Especially in a game that, for example, has a lives system and no way to gain lives. That’d really suck, wouldn’t it? Hypothetically of course. Especially if that boss hits twice as hard as the generic enemies anyway.

The level design starts out fairly basic but gets more interesting as the level continues, with the game checkpointing at every screen transition as well as at special checkpoint flags if the screen is long enough. The platforms are placed well to keep a good flow going, and you control well enough in the air that jumping around feels good. The level boss actually attacks you occasionally throughout the level, which is both a level hazard and a helpful hint as to how you’ll be fighting them later.

However, there are several significant missing features in this build, most notably the ability to pause the game. If you want to quit playing you have to wait until you get a game over first. The options menu is similarly devoid of much of anything, with every option being some kind of toggle. If you like the music but it’s too loud, you can’t fix that in the options. You’ll have to adjust your computer’s setting and set them back later, because the only sound options are ‘on’ and ‘off.’ 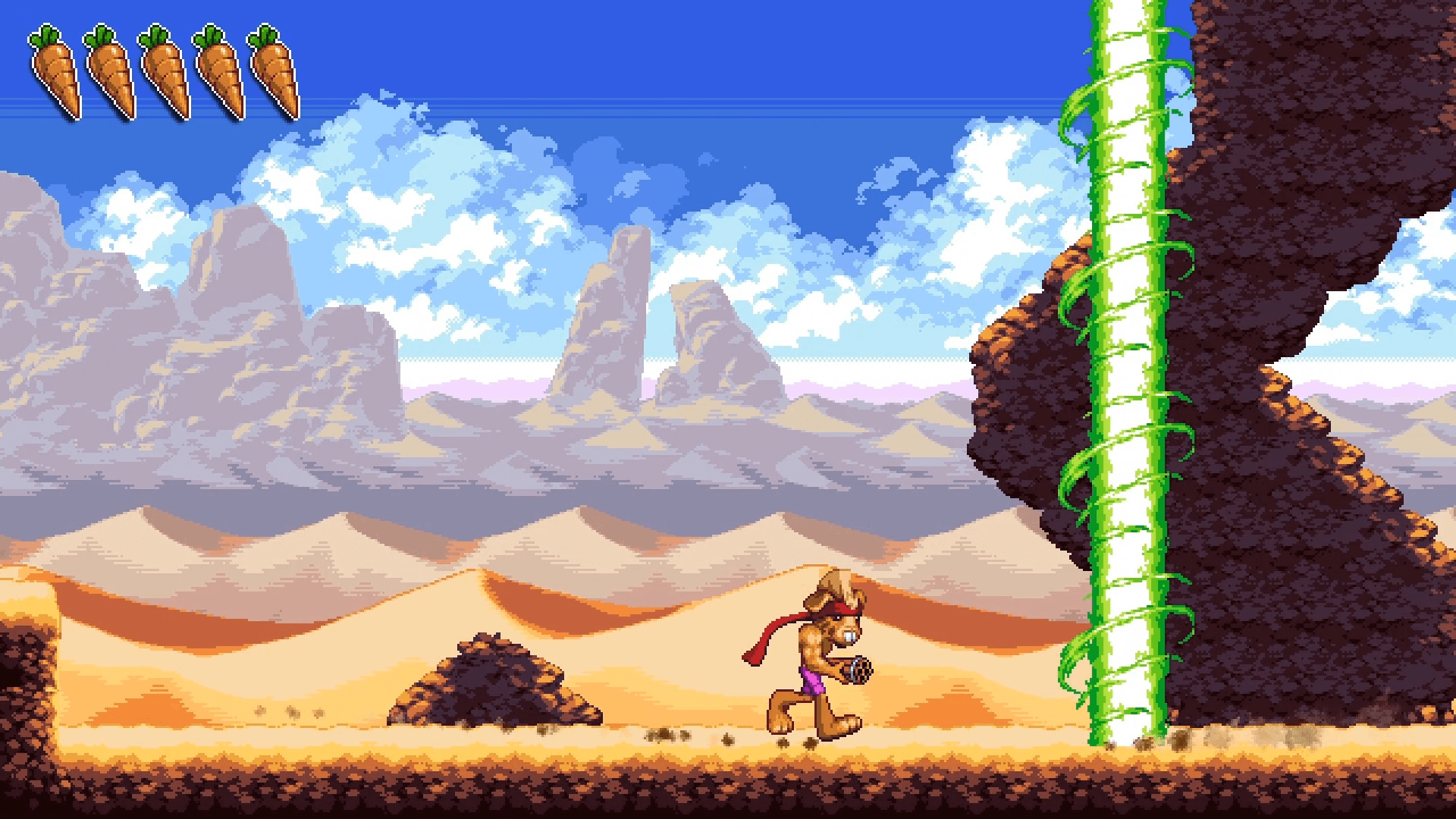 I’m frankly astounded. The pixel art in this game is incredibly impressive. The animations are fluid and detailed. All of the characters have distinctive appearances, and you’ll never mix up any important visual information, like what way something is facing or moving.

There are a lot of small touches too, like how moving across the sand kicks up dust underfoot, something that enemies and even some enemy attacks do as well.

I appreciate the visual consistency of all the enemies having some kind of green in them like the green instant-death spikes as though they’ve all been created out of the same material, and how the enemies shatter like crystal to further cement that idea. Even the boss’s fire and projectiles are that same green. It’s a nice shorthand to demonstrate a relation between your enemies. It also raises interesting questions about why you flash green during a dodge.

Though, I have to admit, in the sprite for when Chester is pointing his gun upwards but standing still, he looks like he’s got his leg up in a way that amuses me greatly for reasons I could not name if I were held at gunpoint.

The boss has a strong visual identity to him, with the winged manticore look. He’s also animated in a way that makes it easy to tell what attacks he’s using, which is great.

The fact that Chester has that signature headband of the 80’s action hero despite being a guinea pig that has a body like Bugs Bunny is extremely funny to me, and that’s the point.

The background parallaxes are gorgeous and scrolls well to really sell a sense of depth to the world. The foreground details pop against the background so you’ll never question what is and is not something you can stand on. 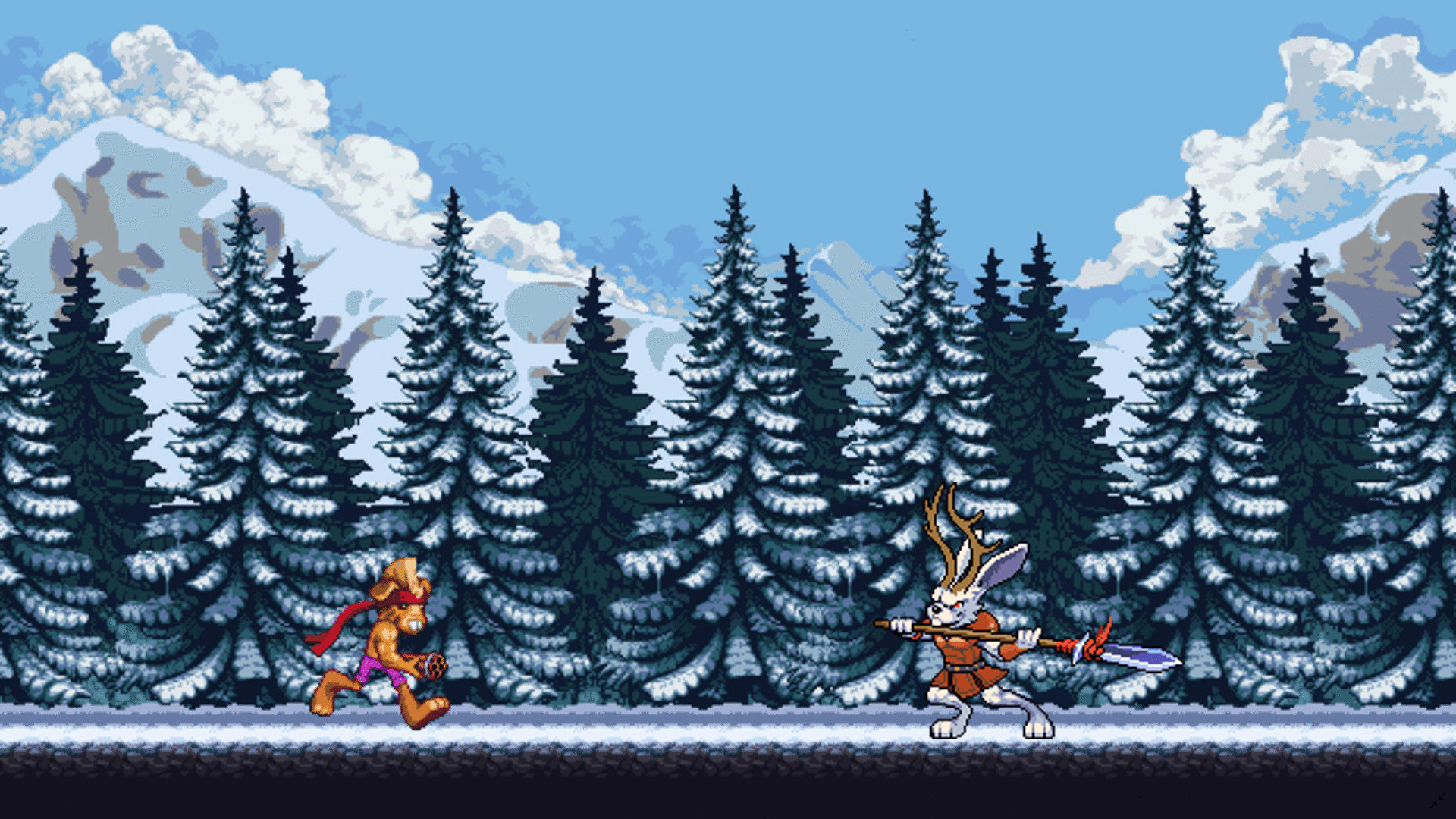 I wasn’t expecting this game to have any voice acting, but here we are. The voice acting isn’t bad either. The first boss is audibly having the time of his life in the recording booth, even if some of his dialogue makes absolutely no sense until you realize that he’s referencing classic rock songs for no discernable reason. Unless it’s a pun on the band names Journey and Poison, and if that’s the answer I will track down the developers and move everything in their office an inch to the left. But for the most part the boss speaks entirely in, well, 80’s Villain Cliches. Really now, were you expecting anything else?

I also do appreciate that the boss taunts you throughout the stage, helping give a personal motivation for you to take them down without getting annoying or patronizing.

The music is also pretty solid, being a catchy chiptune soundtrack, but there is only a single song in this build, not even a boss remix of the main level theme. Given how much character they put into the voice acting, it seems odd to not have any boss theme. If I know one thing about fans of indie games, it’s that we are extremely fond of reading way too much into character themes. Touhou fans have somehow elevated this into an art form and that scares me.

The sound effects are perfectly passable, but nothing that stands out as exceptional either. Admittedly, in a game like this, having a shooting sound that won’t drive me up the wall if I, for example, fire continuously throughout the entire level is an achievement in and of itself. 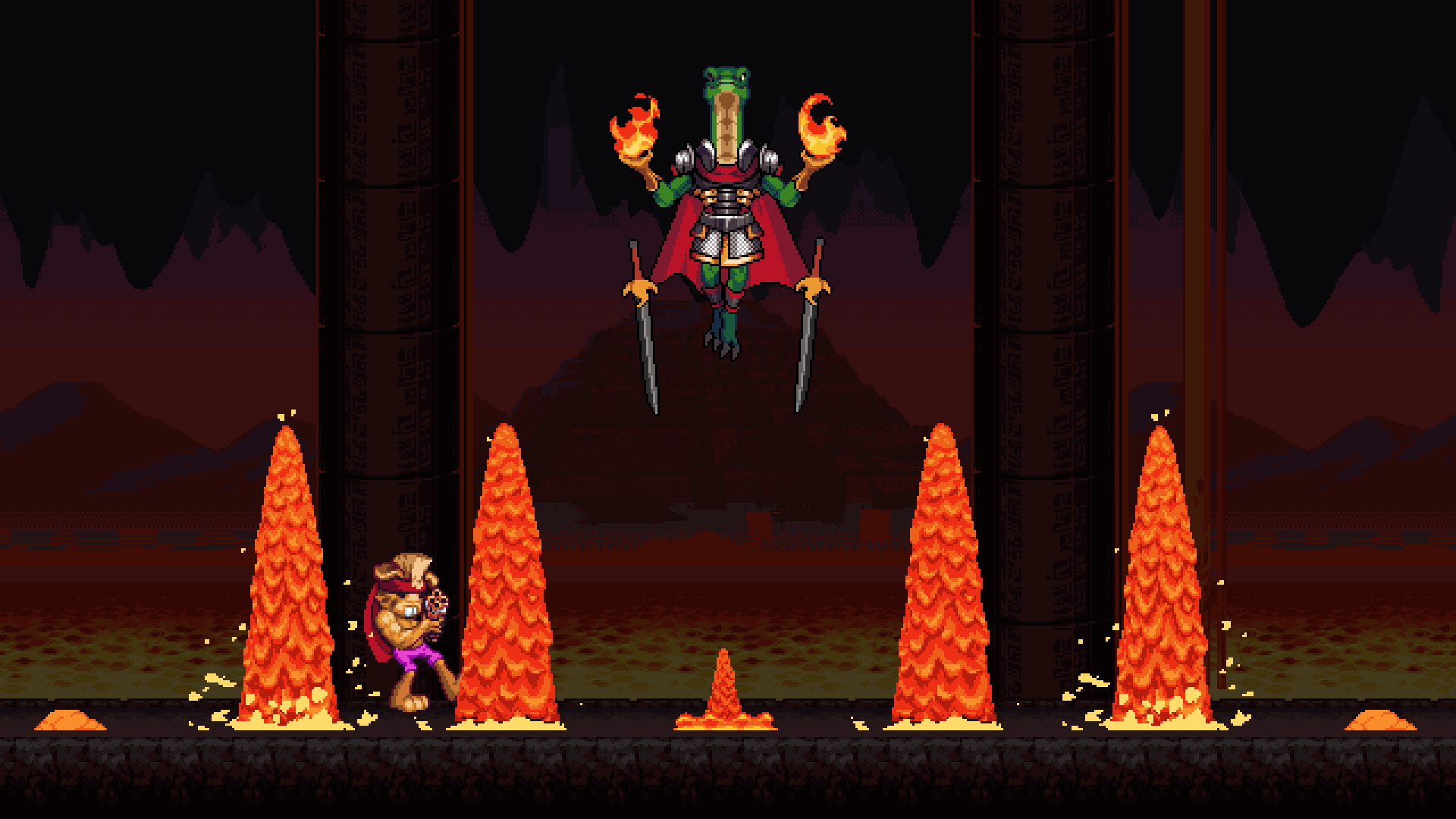 Chester’s Revenge feels like the winner of a 48-hour game jam if they had an art budget big enough to make the host of said game jam blush. The controls are tight but there are flaws in the design that hold back the overall experience that wouldn’t be too much of a hassle to fix in a full release, but enough of a hassle that it wasn’t a priority during development. Hopefully this incredibly specific simile will tell you everything you need to know.

Backroom Beyond releasing in July

Backroom Beyond releasing in July