Kraino Origins is a weird title to give to a game. It implies that you fully expect to have a sequel, or that you are a prequel.

Now I had never heard of this Kraino fellow before, but it turns out that there’s a Kraino phone game, and there’s already a demo out for the next Kraino game, with a full release scheduled for next year, so I suppose it’s not quite hubris. This time.

It’s also a weird title because I can never remember the word ‘Kraino.’ It’s strange. Despite being the name of the main character, the moment I look away from the word it slips completely out of my memory.

Kraino Origins is what happens when you take Mega Man, the early Castleania games, and Super Mario Brothers 3 and put them all into a blender. Crucially, the blender must be a modern blender and not a blender from the early 90s.

They Did the Monster Mash

Kraino Origins is, as you may have guessed from my above summation, a 2D action-platformer specifically in the style of retro SNES-era games. I even recognize some of the game’s subweapons from Mega Man and Castlevania but with the serial numbers filed off. No officer, this isn’t the Holy Water and Cross, it’s the Bomb and Boomerang. Pay no attention to any similarities between the energy shield and the leaf shield. Heck, you even get items by breaking candlesticks.

A lot of modern games that seek to emulate the style of older games bring back lives as a system. Of course, lives are an arbitrary roadblock to progress and frequently provide more frustration than fun, like all means of undoing player progress.

Kraino Origins does not have lives. If you die, you return to the most recent checkpoint and try again. The only consequence is that somewhere around a fifth of your spending money is dropped where you died, and if you die again before getting it back, you lose it. Interestingly, exiting a level without completing it refunds any money you lost, though this is because your progress is only saved at the end of the level, so doing this means restarting from the very beginning.

Don’t be fooled by the fact that you have infinite attempts at every challenge in the game. You will need them. I learned the hard way that this game has a Steam achievement for dying 50 times while playing the very first level in the game. You start with very little health, and the game is filled with various instant-death traps. Those red spikes from Cave Story continue to find steady employment, for example, and it turns out the protagonist is water-soluble, among others. And while it isn’t often, there are times that enemies will be positioned in such a way as to knock you back towards instant death.

Despite this, I rarely felt cheated by any of my deaths. It did happen, and I won’t pretend that every challenge in this game is totally fair, but the developers clearly weren’t aiming to infuriate me, which is more than I can say for The Messenger. Incredible how much more I’m willing to put up with when I don’t have to skip through a condescending and/or outright insulting death message every time I die. But enough about games I’ve already reviewed, this is Kraino Origins.

Combat is primarily based around swinging your scythe at things that move until they stop. Crucially, you can also attack projectiles to destroy them, and while I don’t think the game ever tells you this you also have a parry move that reflects projectiles if you time it right.

There’s a good variety of enemies, ranging in difficulty from ‘will literally never be a threat to me under any circumstance’ to ‘why on Earth did you give the Hammer Bros from early Mario games the ability to aim at me directly?’ and they’re placed to good effect so no one enemy feels overused.

My only real complain about the combat is the boss fights. Among other problems, bosses have trouble properly telegraphing their attacks. The second boss, for example, has two different attacks that are telegraphed with the same animation. Additionally, the midair attack that lets you bounce on enemies a la Shovel Knight or Hollow Knight can be temperamental in whether or not you are allowed to hit the enemy without taking damage.

Though for some reason whenever you hit something with your basic slash you get pushed back ever so slightly, and this can easily throw off your spacing for dodging and in general doesn’t feel great.

While individually none of the bosses are necessarily a problem (except the fifth boss, who fully deserves to be in the lava-themed stage for thematic reasons), all of the problems with the bosses becomes extremely prominent during the boss rematch rush at the end of the penultimate level, where you have to fight the previous six bosses with a checkpoint only after the first three. And yes, that fifth boss is solely to blame for my inability to proceed further.

The game has some really clever platforming challenges, though the mechanics can be fiddly. Like I mentioned a moment ago you can attack downwards to bounce in the air if you hit an enemy or buzzsaw or something like that, but those hitboxes still feel not as consistent as I would like.

Each level has around five secrets hidden within. A shopkeeper who keeps turning up to comment on the level and sell me new legally distinct subweapons, three pieces of a single health extension, and a mana extension for subweapon use. There are also hidden items, usually money but sometimes a health restore.

Honestly I’m quite impressed with the secrets. Almost all of them are hidden behind a fake wall requiring you to pay attention to look for any walls that stand out as potentially breakable and then there’s almost always an entire hidden platforming gauntlet to get the loot.

Money is solely used for the subweapons as far as I can tell. Once you buy a subweapon you can take it to the shopkeeper at his place on the world map and spend more to upgrade it if you also have a skull to spend, acquired from the optional levels.

That world map is why I mentioned Super Mario Bros 3, if you were wondering. They even have the same START tile.

Though, as I mentioned, I hate when games undo my progress, and Kraino Origins only saves progress at the end of a level. In other words, if you get every secret, make it to the boss, get stuck, and want to take a break? Well, your options are to keep the game running or do the whole level again, and that includes hunting down those secrets.

Developer MyDearest is giving us a sweet update in line with the release of their VR science fiction game Dyschronia: Chronos…

It Was a Graveyard Smash

The game has an interesting choice in aesthetic, making it reminiscent of the classic retro games it’s taking heavy inspiration from but without looking like something that would’ve genuinely been on the SNES. I don’t really know quite how to describe it, but it’s like they took the limited palettes of the NES but modernized the quality of the actual artwork.

Or maybe I just need to play more NES and SNES games. Both are possible.

Either way the environments are detailed a pop against the parallax scrolling backgrounds, making it easy to determine what is and is not a surface that you can stand on. Each of the game’s eight stages has it’s own theme and visual identity, even if there is a considerable overlap in the gothic tropes being used.

And that’s all before factoring in the small details added to signify that a wall can be destroyed to reveal a secret on the other side.

The enemies have some solid designs for the most part. I’m not super impressed with all of them, but even the ones with weaker designs have a good quality to them.

This game’s readability is genuinely impressive. It would’ve been easy to make certain things hard to spot from the colors to the size to the art, but you can aways parse exactly what’s happening on screen. 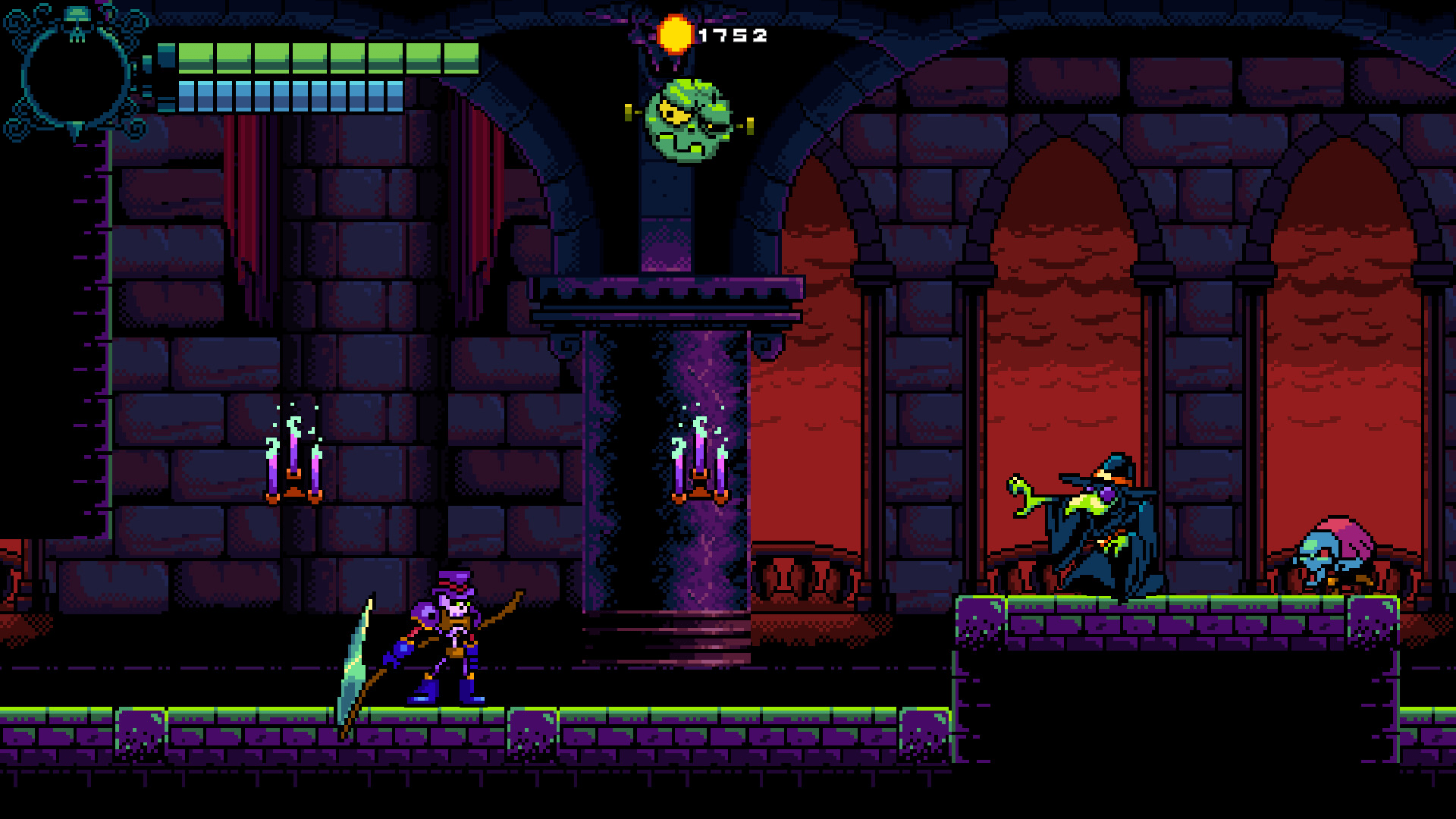 It Caught on in a Flash

The music of Kraino Origin is really interesting to me.

It combines chiptune synth instruments with proper instruments or whatever you call instruments that aren’t chiptune. The end result is something that I am sure isn’t unique, but this is the first time I have personally heard it and I have to admit that I dig it.

Though it’s not like the levels have a real mood to set. It’s a tongue-in-cheek gothic setting, and I’ll be honest I probably wouldn’t be able to tell you which song went in the forest and which went in the volcano. They’re all variations of ‘spooky music’ to some extent.

The sound effects are also a blend of modern ad retro. Most of the sounds are the old crunchy classic style sounds, but some of the sounds are far more crisp, like hitting your scythe against a swinging blade getting a metal clashing sound.

I’m not too fond of the fact that there’s a sound effect associated with whenever you start moving from standstill, and I don’t know how I feel about the specific jump sound effect though.

Despite how brutally difficult the game can be, it’s a fun little bite-sized game. It’s far from perfect but it’s not a bad way to spend a few hours. Some of the character interactions remind me of the bits of The Messenger that I liked