Clan O’Conall and the Crown of the Stag is a game that makes me specifically very happy. As someone of Irish descent with an interest in mythology, a game about Irish mythology hits all the right notes for me. Of course, a game with a lot of promise is a game with a lot to live up to. Something can only disappoint you if you expected more from it.

Fortunately, Clan O’Conall did not disappoint me. 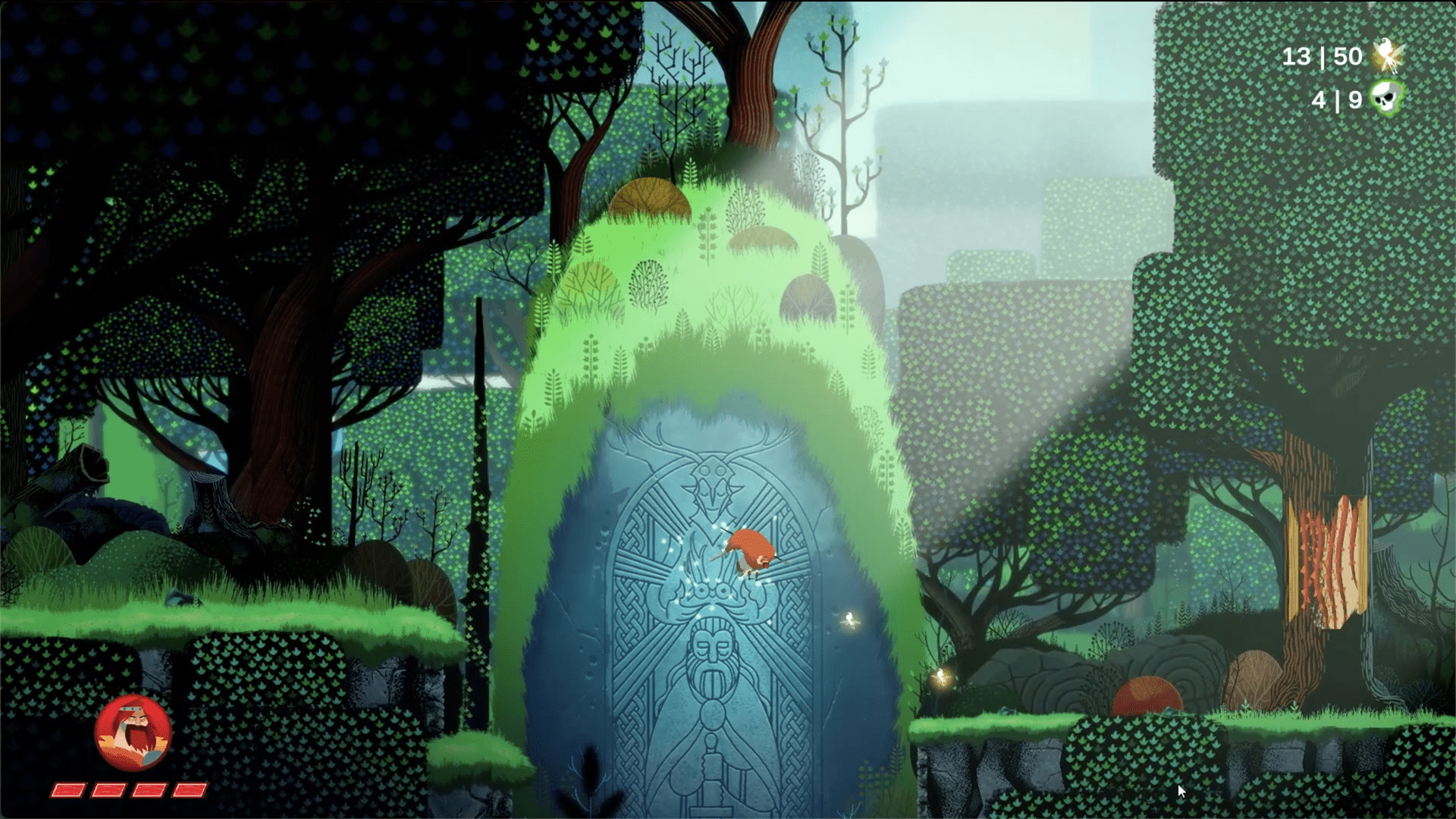 Clan O’Conall and the Crown of the Stag is a 2D action platformer with the occasional puzzle thrown in for spice. The central gimmick of the game is that, much like fellow indie game Trine, you control three different characters with their own unique abilities, and you switch between them on the fly. Trine is the example I used because all three of them are not on screen together outside of cutscenes. The implication is that all three of them are working together as a unit, but in gameplay terms you switch them in and out.

While all three playable characters have the same jump height and movement speed, they all move very differently. Kilcannon the Swordmaster has a glide, while Clakshot the Huntress has a double jump, and Haggish the Brute more or less uses his dodge in midair to extend his jump.

Each character has a dodge ability as well, each functioning different. The Huntress rolls past enemies and under obstacles, for example, while the Swordmaster flips backwards.

The platforming challenges in Clan O’Conall is based around figuring out which of your various abilities will help you progress, usually swapping between multiple characters. You might need to glide over a pit as the Swordmaster, switch to the Brute to smash a wall, then switch to the Huntress to hit a switch.

I find the level design really interesting in how it’s actually very linear without feeling linear. You frequently have to double back on yourself in some way, either climbing a higher floor of a previous section or occasionally being forced into a dead-end pathway with a new ability at the end of it, giving you more traversal and puzzle options.

Puzzles are also generally small, open areas giving you a lot of freedom in how you move about the room, even if there is only one solution.

The new abilities in Clan O’Conall strike that hard balance I always love of helping with movement or puzzles while also being usable in combat, with the exception of the Huntress’ grappling hook. The Swordmaster gets an attack that also charges him forward if it hits the vines he cuts through, and the Brute can pick up enemies and heavy boxes to throw them into hazards and onto switches, respectively.

Speaking of hazards, I really appreciate that enemies are instantly killed by any hazard they get hit by, regardless of how much or how little damage that hazard would deal to the player.

Combat is about as simple as it gets nowadays. The Brute and Swordmaster have their melee combos and certain directional attacks as well as their dodge moves. The Huntress instead shoots arrows in whatever direction she’s facing or the direction you point her in Aim Mode, though she also locks onto targets if your aim is close enough to them.

There’s a good variety of enemies so combat doesn’t get stale, and the Huntress’s attacks are weaker than the Swordmaster or the Brute to compensate for her increased range, encouraging you to take bigger risks and get closer for melee combat.

Speaking of risks in combat, the game uses an interesting health system. Each of the three playable characters has their own health bar independent of the other two. If any of them hit zero, you’re reset to the last checkpoint, so swapping out your injured O’Conalls for their less injured siblings is crucial. On the other hand, healing items found scattered throughout the level will heal up all three characters without the need to ensure your injured specifically picks up the health. I quite like how this greatly encourages you to use all three of the playable characters instead of sticking to a single one.

Clan O’Conall has quite a few small things that make the game much more fun to play than it would be otherwise. I mentioned the auto-lock for the Huntress’ arrows a moment ago, but there’s also that characters can grab ledges, the coyote time, the generous invincibility granted by dodging, among others.

Heck, the even manages to make forced stealth gameplay fun! (Note: if you somehow haven’t come across this gameplay trope before, stealth gameplay is fun, being forced into stealth gameplay in non-stealth games almost never goes well.) Their solution to this problem that has plagued the industry for decades is really simple: the enemy isn’t actually all that threatening, you just can’t hurt it. At least, not without ringing a special bell that instantly kills any of these enemies who are close to it. The enemy in question, the banshee, also makes its presence known through its sobbing well before you see it or its vision cone, giving you time to prepare for it.

The game also has an excellent grasp on level layout, as I alluded to before. I never feel like I’m fighting against the level design or frustrating elements making the game much harder than it needs to be.

You are never introduced to a new concept somewhere dangerous. The game always gives you enough time to come to grips with whatever new thing they’re throwing at you before they actually start challenging you with it.

I wasn’t actually expecting this game to have character progression, but it does and does it in a way I wasn’t expecting. Every level has a set number of fairies in it, which do not reappear once collected. You get bonus fairies for each secret you uncover and each enemy you defeat, meaning that by scouring the level and slaying all enemies, you get all of the fairies in the level. That’s important because fairies are actually currency for leveling up each character.

You buy character levels for each character independently. Each level gives you more health and more attack, but it also gives you access to a new ability, like the Huntress firing two arrows at once or the Swordmaster’s dodge also becoming a counterattack for melee hits.

I do have to complain about the camera. The sprawling nature of the platforming requires a much more zoomed out camera perspective, but that makes it hard to keep track of how enemies are telegraphing their attacks in combat. Most of the time, you can manually zoom in, but that’s more of a band-aid than a solution, and the more things you have to keep in mind in combat, the harder it is to focus on not getting hit. 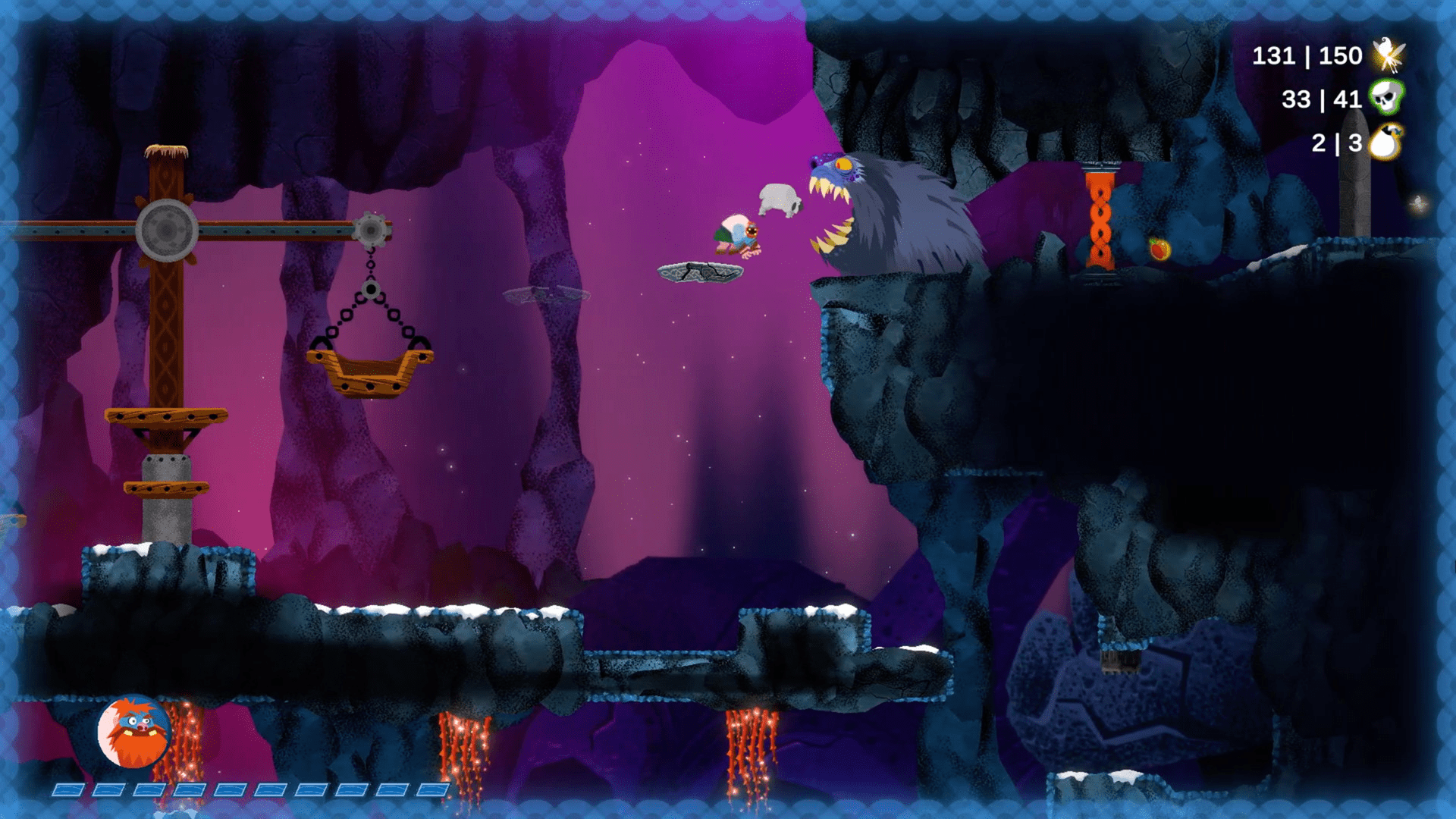 Clan O’Conall and the Crown of the Stag is easily one of the most visually stunning games I’ve played in recent memory. It looks like playing in the world of a Cartoon Saloon movie, and if you haven’t seen their work, go watch The Secret of Kells and Song of the Sea, you’ll thank me later.

The backgrounds are rendered in absolutely stunning detail that left me genuinely speechless when I booted up the game for the first time.

The environmental design of the fantastical parts of Irish myth are incredible, from the wonderful forests of the mortal world to the haunted graveyards roaming with the restless dead. My personal favorite is the sprawling crypt of the Dullahan.

And of course, how could I talk about a game taking inspiration from any mythology without actually mentioning the design of those mythological elements? The characters walking straight out of legends are all excellently designed, taking into account their origins and myths to truly capture their character, like how Jack-In-Irons wields skulls and chains in his battles.

The HUD and UI elements all look great and work really well, helping you keep track of important information without obscuring any part of gameplay.

And I’m pretty sure all the art was done by hand, too! At the very least, the cutscenes are, I’m not 100% certain about the rest of the art, but I am pretty sure. 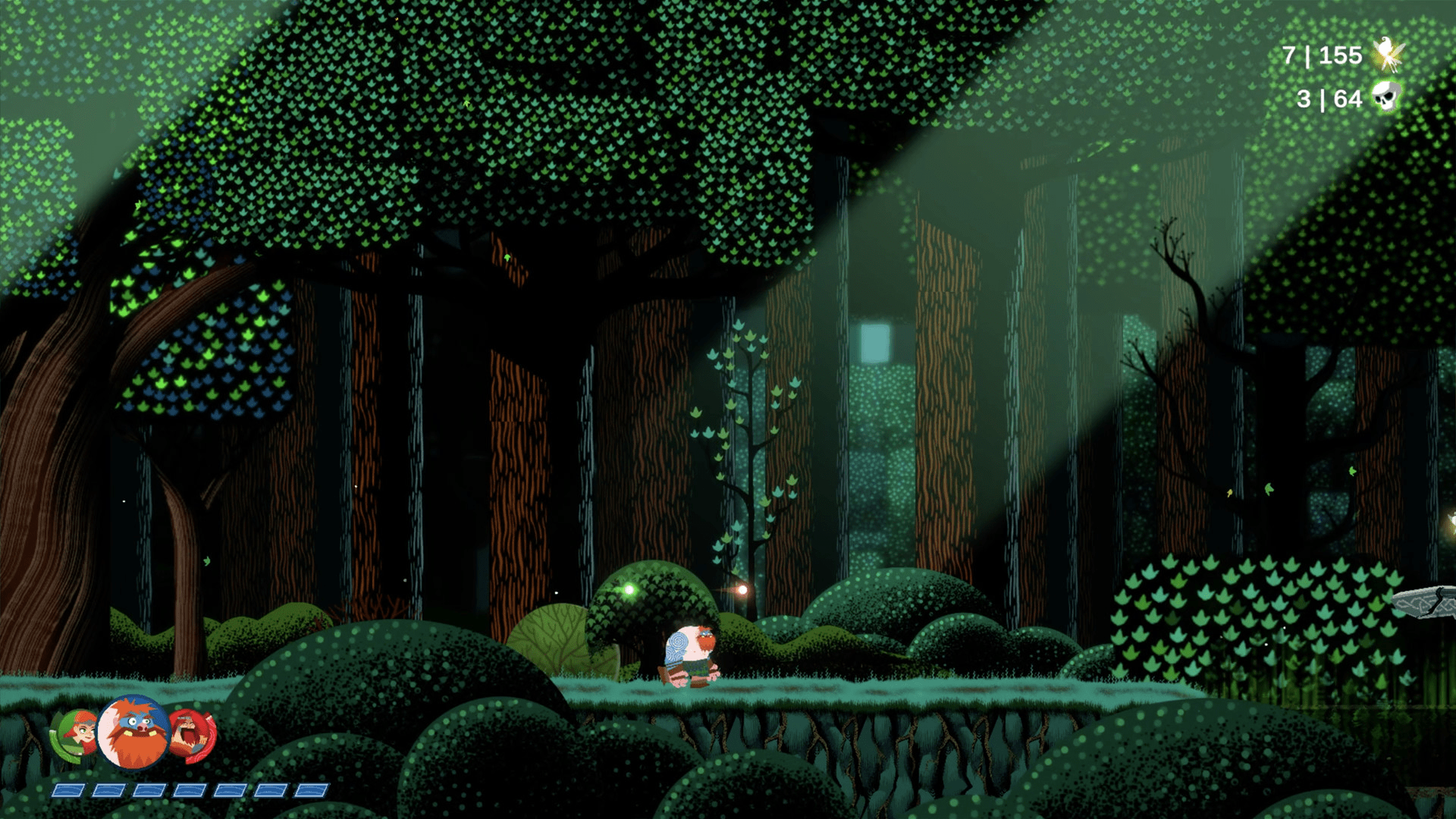 Those of you who read my V Rising review might remember that I am contractually obligated to recommend the music from the FATE series (not to be confused with the Fate/ franchise, I mean the hack-and-slash games). Well good news, Clan O’Conall and the Crown of Stag also features an excellent soundtrack of Celtic-inspired music.

The instruments are lovely, the melodies are strong, and they flow well with the levels. The music is superb and really helps with the game’s strong aesthetic.

The sound effects are also pretty good, adding the extra impact to all of your actions, from charging up a bow for a stronger shot to slamming down into the ground and sending shockwaves out to hit everyone.

I am somewhat disappointed that the menus don’t have any sound effects when you move your cursor across the different options. It’s a minor thing, but it’s so expected that it’s actually notable in its absence. 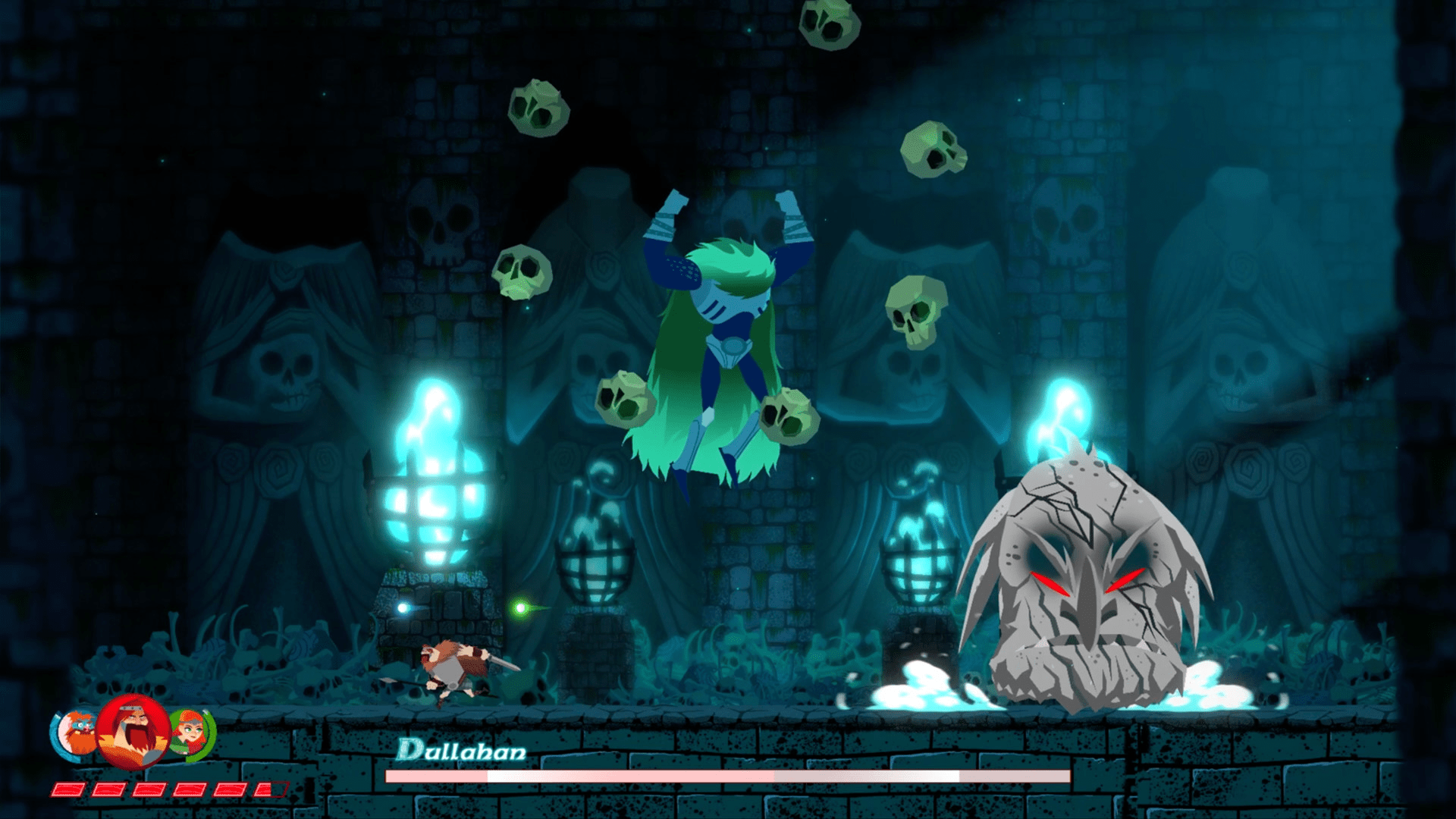 While the game has a fairy simple excuse plot (Caoránach, mother of demons, has kidnapped the patriarch of the O’Conall family and stole the titular crown in order to end the peace between humanity and the magical beings of Irish myth, the O’Conall heirs set off to smack her in the face until she knocks it off), the game’s strong gameplay, excellent visuals, and wonderful soundtrack make it one to keep your eyes on.