Skip to content
Facebook Twitter Instagram YouTube TikTok Reddit
From the collaborative effort of legendary rock band Radiohead, Playstation, and Epic Games comes the KID A MNESIA EXHIBITION which was released this week. As you can see from the trailers alone, the free downloadable game is one that is meant to be experienced and enjoyed at a slow pace. Interesting gameplay takes a backseat in service of an audio-visual experience, creating a truly chilling world in celebration of not only 21 years of Radiohead’s albums Kid A and Amnesiac but also the albums combined re-release, Kid A Mnesia.The developers of the exhibition, [namethemachine] and Arbitrarily Good Productions, set out to bring the lyrics and emotions of the album to life. Using the Unreal Engine and Wwise, we see  the setting, sound design, visuals, inhabitants of the world and everything in between is inspired and created from the experience that is Kid A Mnesia. The universe that the developers have created feels like a fever dream filled to the brim with odd creatures and mind-boggling architecture.

LootLite is Slashing its way onto all Platforms 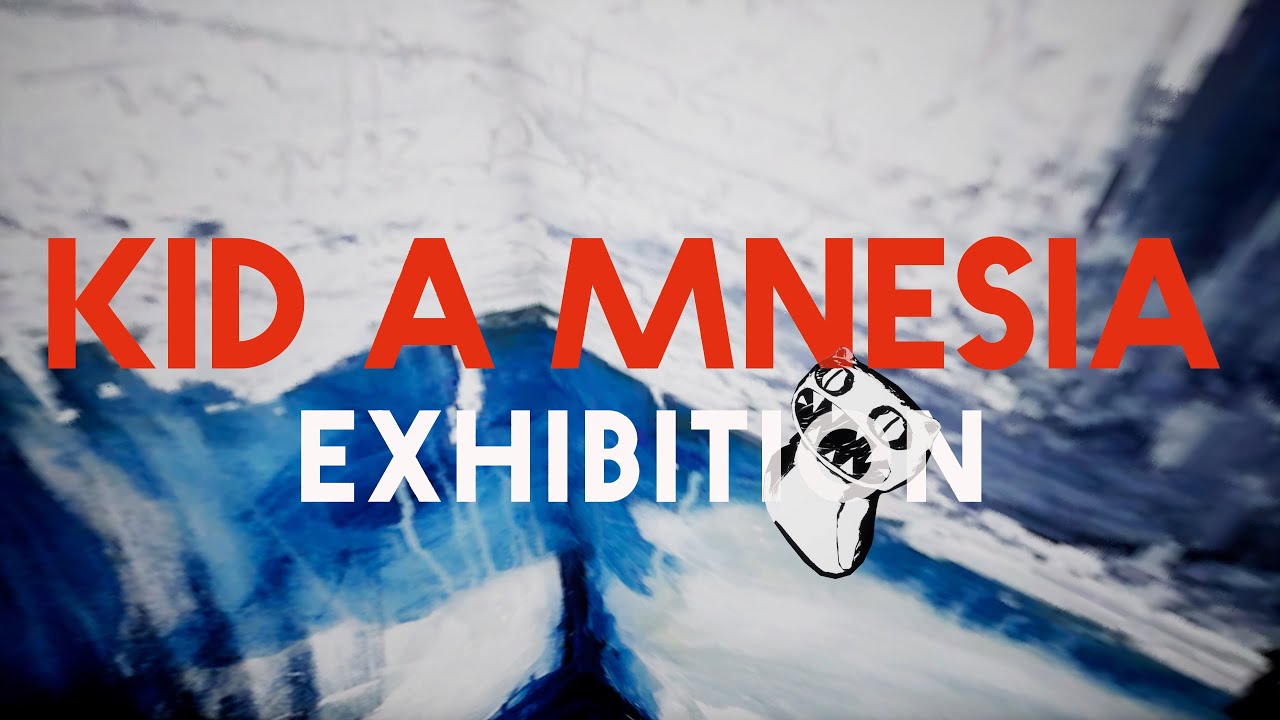 This is a project that has been in the works for a while. According to devs, this exhibition has been in development for two years and was supposed to be physical. The trailer for the exhibit appeared at this September’s Playstation Showcase 2021 and had fans guessing at what it might be. Some even predicted it to be a Fortnite concert due to Epic Games involvement. What we are actually receiving feels more immersive and dedicated for the fans, though I wouldn’t completely shelve a Radiohead Fortnite collaboration.A museum of these iconic albums takes fans back to the mind-set of the band. Radiohead was struggling to make a follow up  of high standards after they reached what many considered to be their peak. Reaching incredibly high levels of success comes with incredible pressure to keep improving. The band was in a dark place mentally as they worked through their creative block and the exhibit taps into this darkness. 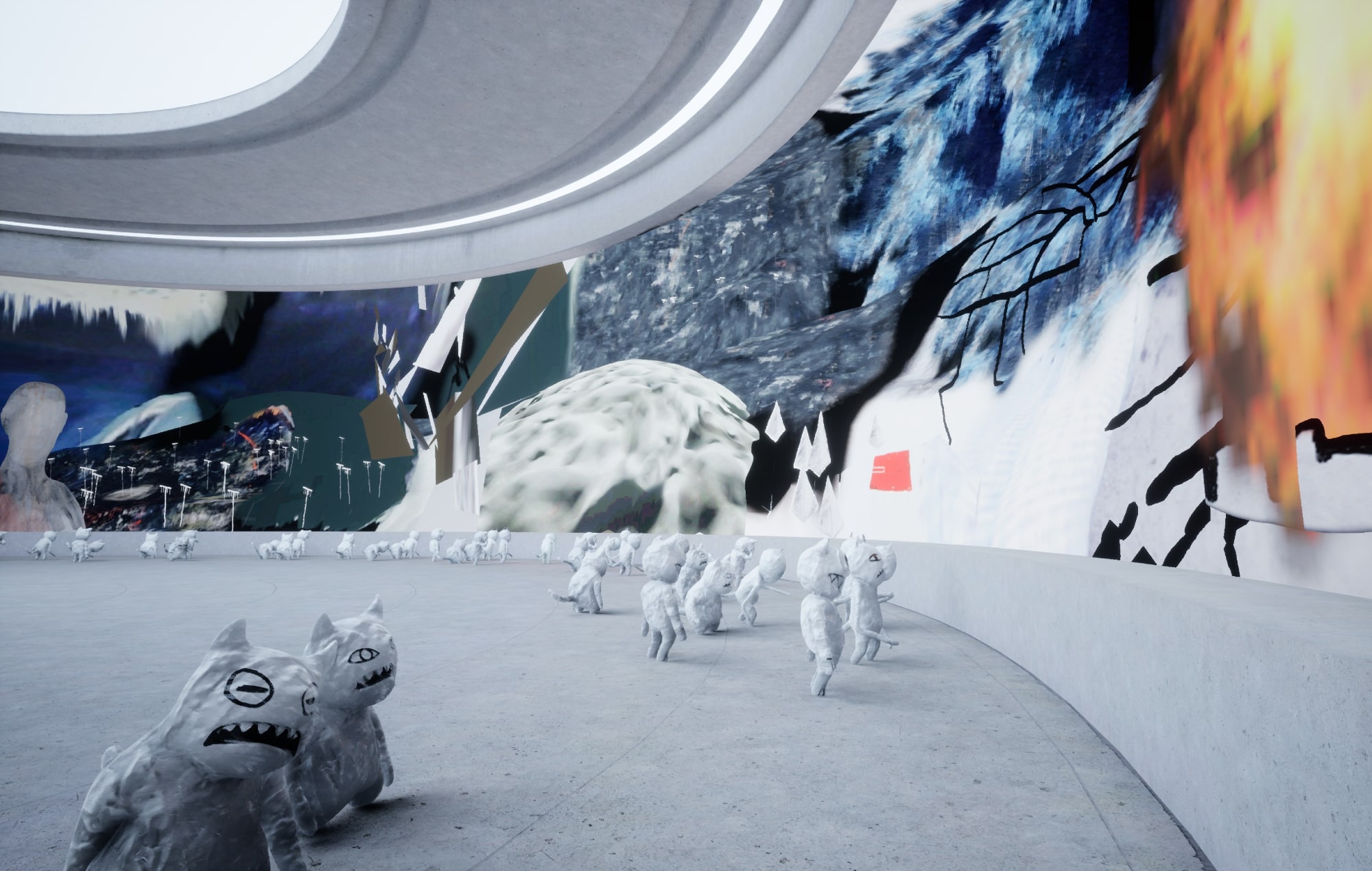 It truly is amazing how many details from the band’s work are sprinkled into the exhibit by the developers. Taking direction from the band, we can see the music isn’t the only thing setting the tone, as the intense and anxious art works of Stanley Donwood and Thom Yorke appear along the walls and roofs of the misshapen world. Those with very keen ears may notice the sound design work of Radiohead’s long time producer Nigel Godrich. Unnerving sounds and writings, also provided from the band, accompany the other aspects to create an immersive atmosphere designed exactly for lovers of the albums.As it comes to gameplay, well, this isn’t really a “game” per se but, as stated previously, it’s an experience. Players control a first person character wandering through the exhibit. The exhibit itself is a building out in a forest but as you progress, you’ll notice that the dimensions of the building may not be what it seems. Hallways become elongated and walkways shoot off in impossible directions, the building is impossibly tall yet feels claustrophobic due to the creepy visuals. 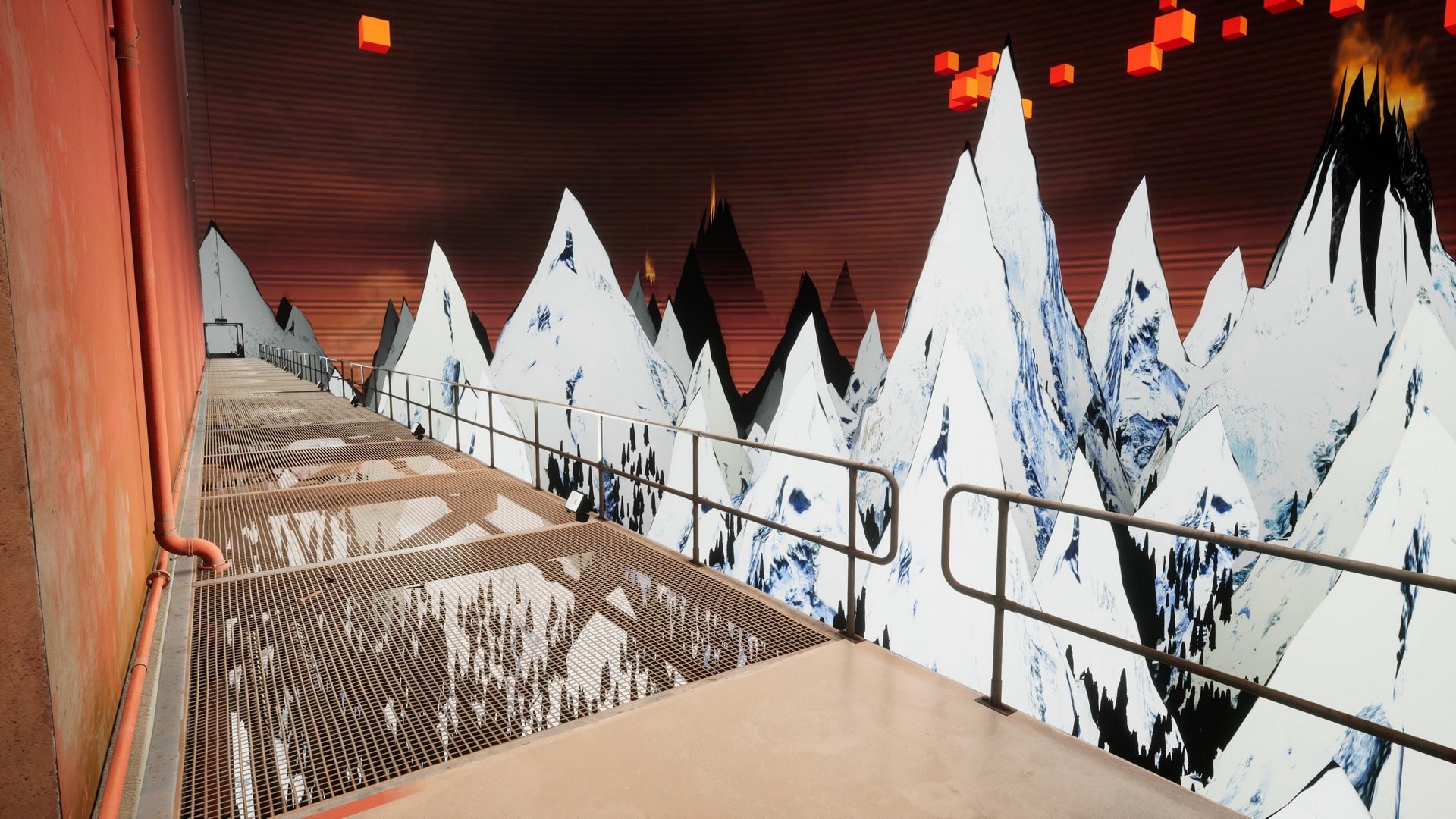 Another impressive fact about the exhibition is the developers themselves. Arbitrarily Good Productions is a production team that specializes in real-time projections in the audio-visual medium. They are a talented team with a brilliant track record of amazing visual work like OFK and Synthesizer – Faithless. Instead of making vibrant city scapes this time around, they flexed their creative muscles and contributed the twisted visuals that were needed for the project. They paired up with [namethemachine] (who also worked on Synthesizer) a developer who has a lot of experience with the Unreal Engine.The game also makes use of the audio software Audiokinetic Wwise, a versatile software that has a cross-platform sound engine. This brings the possibility of the museum exhibit being brought over to the other platforms besides the PC and Playstation 5 that it will initially appear on. Whether that happens or not, it’s undeniable that the sound design wasn’t labored over as the music and lyrics hauntingly blend together.It’s not often we get new experiences added on to projects that were finished over two decades ago so this feels like a treat. New fans may be unfamiliar with this era of Radiohead so now is a perfect time to experience this art presented in a new way.The free download for Radiohead’s KID A MNESIA EXHIBITION is available now on PC and Mac through the Epic Games Store, and Playstation Store.
# Epic Games# KID A MNESIA EXHIBITION# Playstation# Radiohead 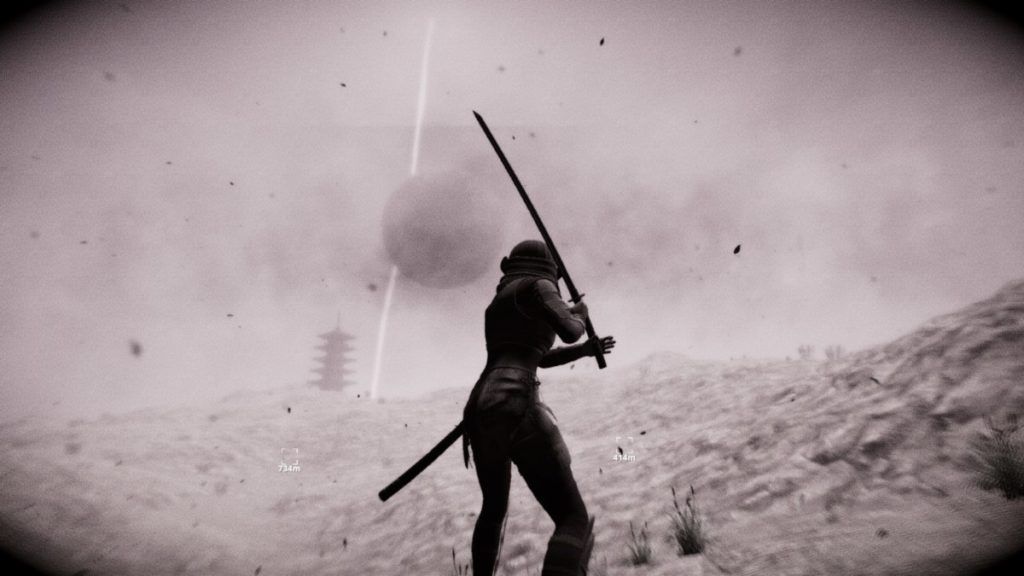 A glorious victory will soon be yours! 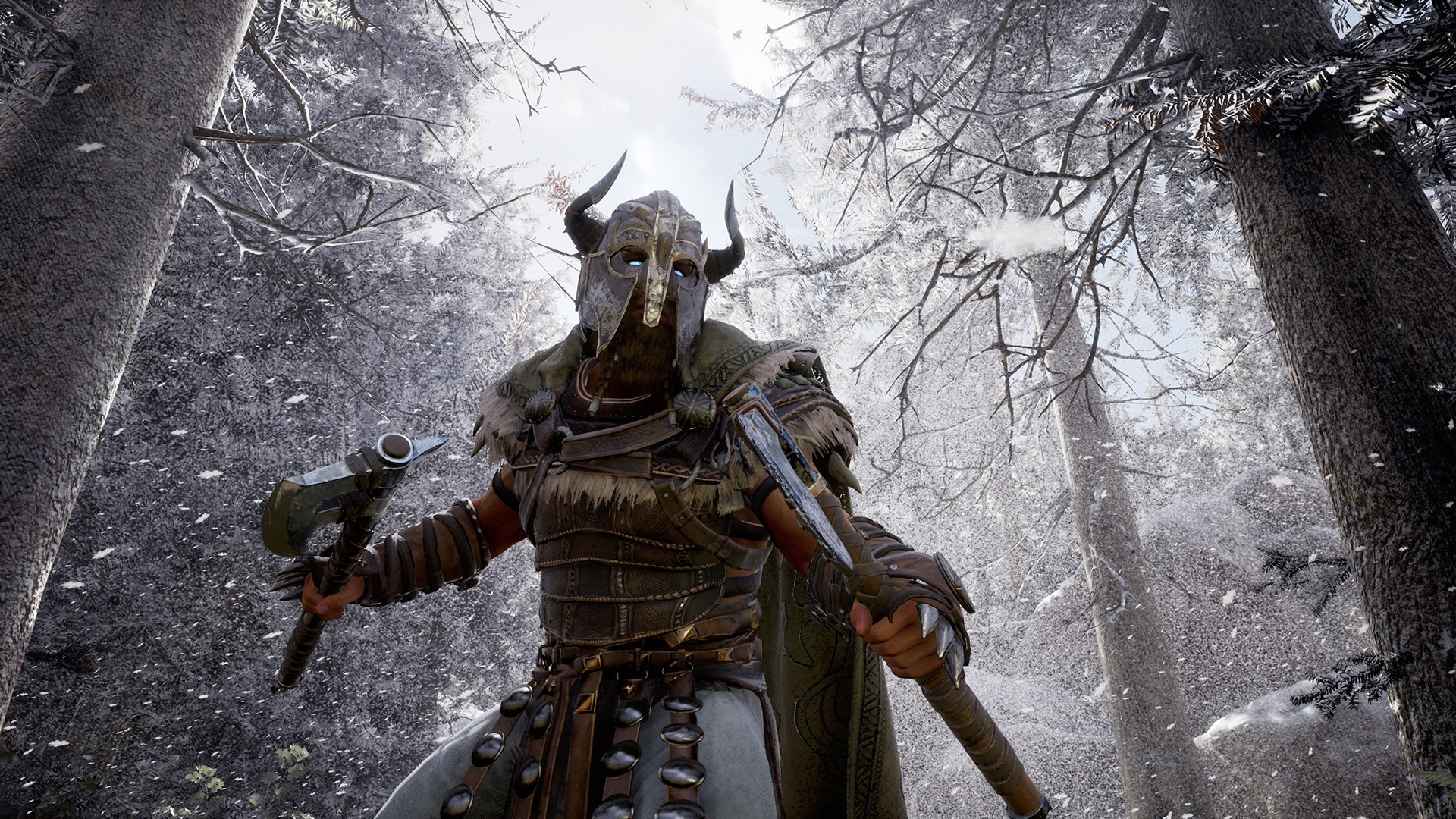